The LARS will be installed on board the Debmarine Namibia new-build vessel known as the AMV3, a purpose-built vessel for recovery of diamonds off the coast of Namibia.

When completed, the AMV3 will be the largest diamond recovery vessel in the world. The concept is based on crawler technology which became successful in the mid-2000s and is now a solution of choice. The AMV3 design meets high environmental standards and has a green passport. Due to its size and technological advancements, this vessel will be the flagship of the Debmarine Namibia fleet. Debmarine Namibia is a partnership between the Namibian Government and the De Beers Group – the world leader in the exploration, recovery, trading and sale of natural diamonds.

The completed LARS was collected by the 150 m long BBC Pearl vessel in early April and is sailing to Cape Town in South Africa for integration onto the AMV3. 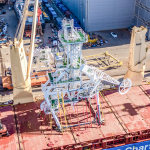 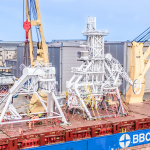 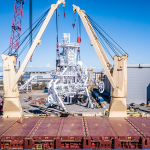 Contacts
LINKS
Cookies make it easier for us to provide you with our services. With the usage of our services you permit us to use cookies.Ok